Facts about the District

The District serves about 5,700 persons through about 2,150 connections. The area served is about 3.3 square miles or 2,103 acres. Our customers include residential, commercial and industrial. The District does not serve agricultural water.

The District is a water producer and retailer for the Casitas Springs, Live Oak Acres, Los Encinos, Oak View and Mira Monte area of the Ojai Valley and a portion of the City of Ojai. It serves a population of approximately 5,700 through 2,180 connections. The District provides water treatment, domestic water service and fire service mainly from groundwater sources.

Water service in the Ojai Valley developed in a fragmented way as different areas and neighborhoods developed. The Ventura River Water District was formed on August 14, 1956, and this new District knitted together systems developed by 6 small mutual water companies and water districts which served the Casitas Springs, Mira Monte, Live Oak Acres, Los Encinos and Oak View unincorporated areas. Subsequent annexation by the City of Ojai of some of this territory led to the District serving a small part of the City.

When full, the Upper Ventura River Aquifer holds about a two year supply of water. If there is insufficient rain after the two years then the District must begin utilizing water from Lake Casitas. Lake Casitas is designed for a 21 year drought (the longest drought on record) and relies upon our District to maximize the use of ground water to make it through the design 21 year drought.

PRIOR WATER COMPANIES AND HISTORY OF MAJOR EVENTS

SMWC articles filed with County of Ventura, and by-law’s enacted at first meeting.

Midway Drilling gave $14,777 contract to drill well #3. It was put into service in November

New line completed across the Ventura River at Highway 150 bridge.

Harold B. Parker appointed as Director of VRCWD.

City of San Buenaventura claims rights to 6,000 A. F. from the Ventura River.

Peggy Wiles elected to the Board of Directors 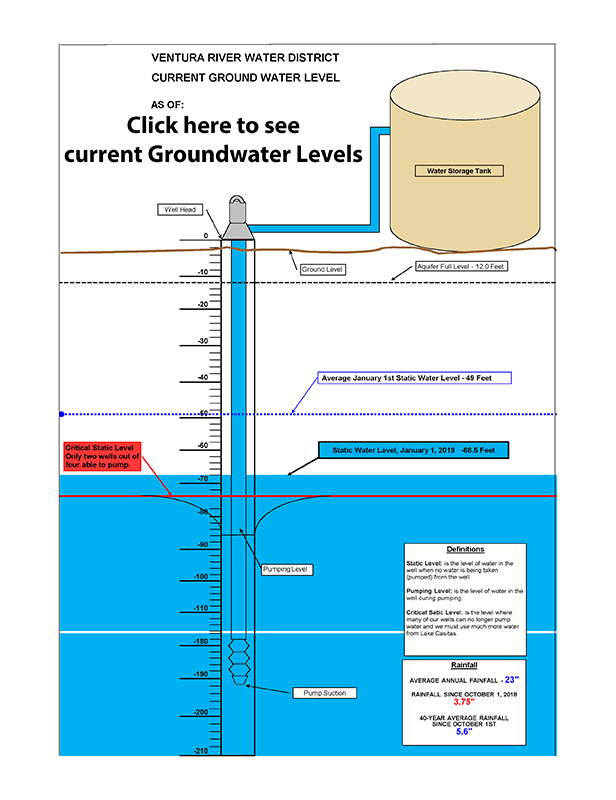